NOTE: All personal details about people on our website have been moved to our Pastebin page:

Cole Richard Jones is a PHD student at University of Houston Main Campus, currently finishing his Master’s Degree in Geology. He is also a Teacher’s Assistant, and studies under Dr. Regina Capuano. Additionally, he recently became the drummer for the local metal band Green as Emerald. Cole proudly sports a large Nazi “Black Sun” aka “Sonnenrad” tattoo on his chest, and has been pictured in-uniform with Patriot Front members at one of their gatherings in Austin, Texas (Photos Below). Cole is deeply networked into neo-Nazi social circles online and in real life. His Facebook friends list includes a large number of Patriot Front members and other assorted fascists, including the founders of the neo-Nazi organization Atomwaffen Division which has become infamously tied to a number of murders and bomb plots around the country.

Gabriel Grant is a University of Houston student who has been seen around campus disrupting a number of leftist events with his friends. Additionally, he has been seen in uniform on multiple occasions with the fascist group Vanguard America, which has split off into a fascist group called Patriot Front. He has been documented at explicitly fascist groupings in Houston, TX, Austin, TX, and Charlottesville, VA. He traveled to and marched in Charlottesville, VA with Vanguard America on the same day James Fields (another member of Vanguard America) drove their dodge charger into the crowd of counter protesters, murdering Heather Heyer and seriously injuring over 20 others.

Gabriel Grant clearly appears in this video from a right wing protest to defend the Sam Houston Monument from a fake Antifa threat to “tear it down”. He is very clearly grouped with other alt right and neo-nazi figures such as the leader of Patriot Front (Thomas Rousseau), and one of the main editors of the Daily Stormer (A notorious neo-nazi website). Gabriel enters the frame around 2:03.

Adam Manley is a University of Houston student who has been seen posting propaganda around campus in support of the extremist right wing group Soldiers of Odin. There are no notable Soldiers of Odin chapters in Houston that we are aware of, but Adam’s interest in putting up their propaganda is a huge red flag. He also appears to follow and be followed by a large number of neo nazi organizations on Twitter, including but not limited to Patriot Front. 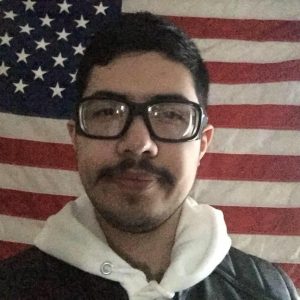