Update (4/15/2018): We received word from an employee at a neighboring business that Ariel was quickly fired when Harris Media learned of her Nazi activities. In addition, on Friday, Harris Media posted a job ad on facebook looking to hire a new graphic designer. 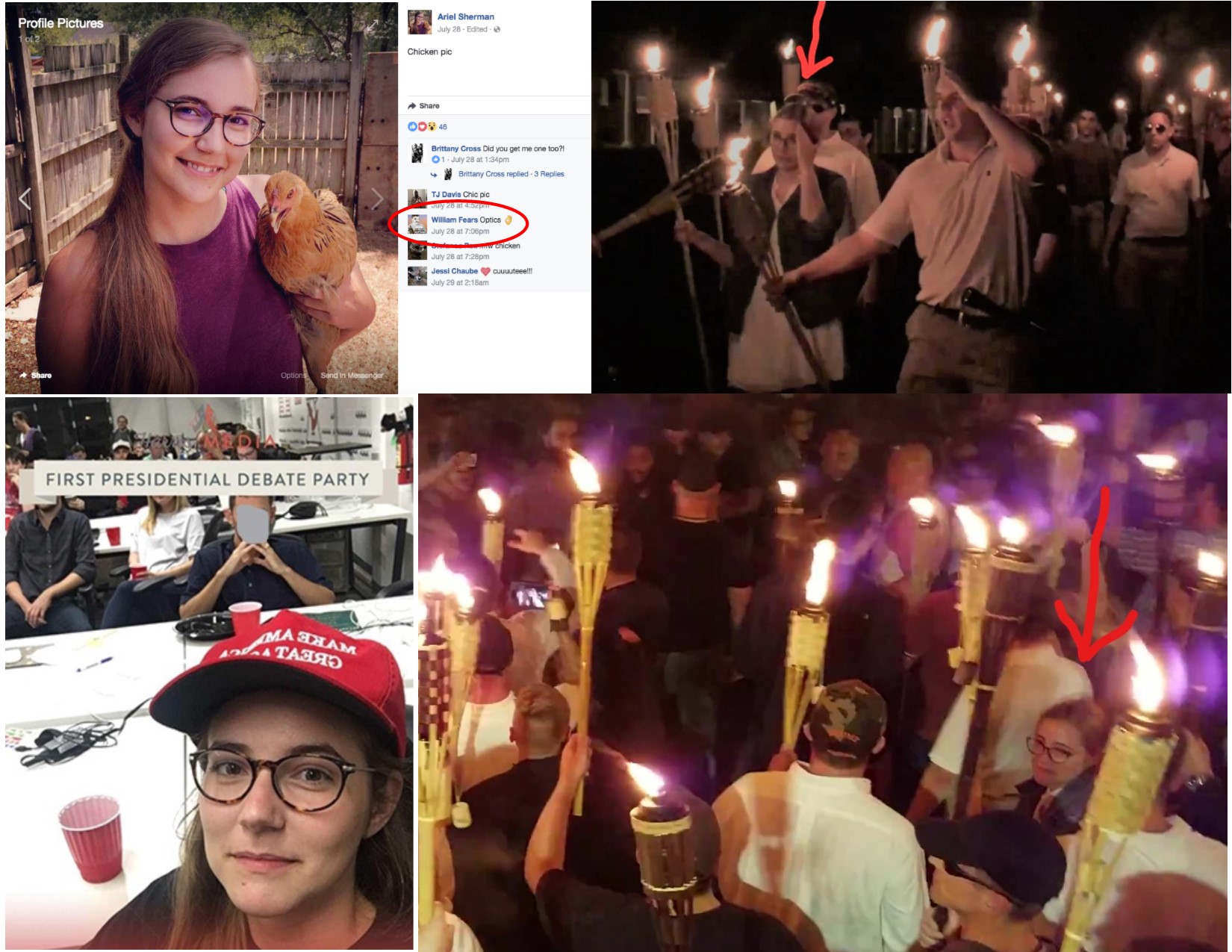 In August 2017, a group of fascists and white supremacists from Texas organized a caravan of vehicles to travel to the white supremacist “Unite the Right” (UtR) demonstrations in Charlottesville, Virginia. According to inside information, one van picked up people in Austin and Houston, then met two other vehicles from north Texas in Texarkana. The group included notorious Texas neo-Nazis like William Fears (subsequently arrested in October for involvement in a shooting outside a Richard Spencer event in Gainesville, Florida), “Azzmador” (Robert Warren Ray, a contributor to the neo-Nazi website Daily Stormer), and Thomas Rousseau (founder and leader of the white supremacist group “Patriot Front”).

The Texas group also included Ariel Gherman. She had RSVP’d as “Going” on the UtR Facebook event page several months prior along with other Texas fascists like Colton Fears (arrested with his brother William in Florida) and Ken Reed. Upon arriving in Charlottesville, they planned to stay at an AirBnb which had been rented under Ariel’s AirBnb account and with Ariel’s credit card. They over-stuffed the AirBnb house with Texas white supremacists, but wanted to be careful not to draw unnecessary attention and reminded each other to only perform Nazi salutes inside the house, not outside. After all, they were planning to bring a variety of weapons including poles, torches, pepper spray, and concealed handguns.

Once in Charlottesville, Ariel participated in Friday night’s torch-lit march on the University of Virginia campus. In videos of the event she is seen wearing a white dress that went down to just above her knees, a denim jacket, and white shoes. Her very long dirty-blonde hair was worn in a single braid down her back, and her brown and gold glasses frames are readily apparent. She can be seen carrying a torch for the duration of the march while participants chanted neo-Nazi slogans like “Jews will not replace us” and “Blood and soil.” She is also often walking next to and sometimes holding hands with a young man dressed in khakis and a white polo shirt—the uniform of the neo-Nazi group Vanguard America. When the torch march arrived at a Thomas Jefferson statute, the march surrounded a small group of anti-racist counter protesters. The white supremacists then assaulted the anti-racist counter protesters. Ariel was there for all of it.

The UtR weekend culminated the next day when white supremacists James Fields, also seen wearing the white and khaki uniform of Vanguard America, drove his Dodge Charger into a crow of anti-racist counter-protesters, injuring 19 and killing Heather Heyer.

In an attempt to avoid surveillance and detection, Ariel, like many of the neo-Nazi participants in the UtR demonstrations, deactivated her Facebook account several days before the rally and didn’t reactivate it for several weeks afterwards. In videos of the event, she is seen trying to hide her face from the cameras. But our memory is long and our resolve is steadfast. Avoiding the limelight and promoting white supremacy and fascism only from the background shadows will not protect you. We don’t forget and we don’t forgive. 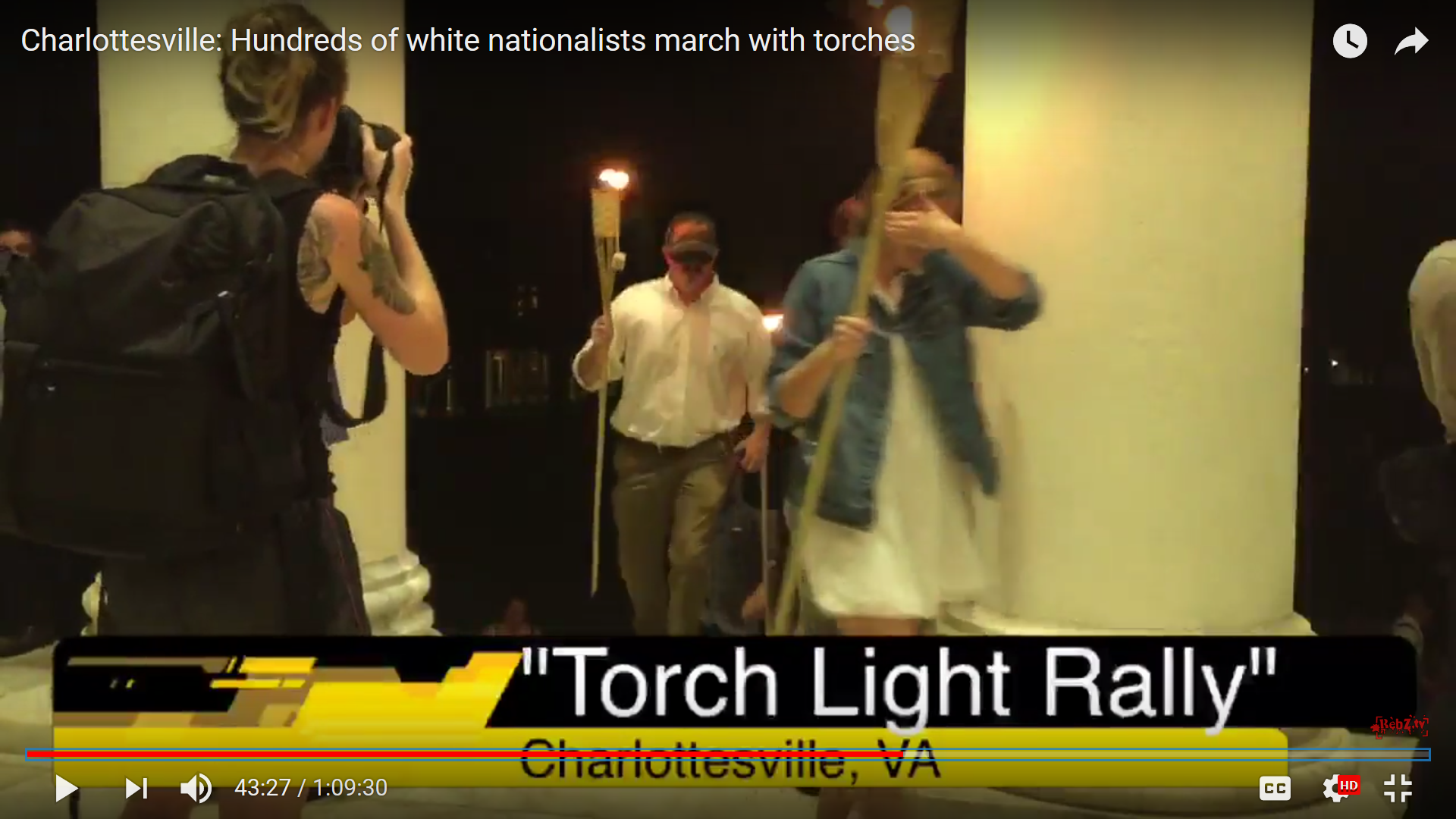 Far from being a passive or unsuspecting attendee, Ariel was fully aware of the fascist and white supremacist nature of the rally, as well as the plans for violence.  By using her credit card to book the AirBnb, traveling to Charlottesville in the Texas caravan, and walking in the torch march, Ariel intended to facilitate UtR’s white supremacist agenda, violence, and racist terror.

When not helping facilitate racist terror around the country, Ariel works a day job as a graphic designer for Harris Media LLC, a digital media firm in Austin that brags about placing tens of millions of dollars in digital advertising content. But Harris Media doesn’t create media for just anyone, they focus their effort on conservative and right-wing clients. They boast about creating content for the electoral campaigns of candidates like Senators Ted Cruz, Rand Paul, and Mitch McConnell, Lieutenant Governor Dan Patrick, Israeli Prime Minister Benjamin Netanyahu, as well as right-wing advocacy groups like Secure America Now (anti-Islam) and Texans for Natural Gas (pro-fracking). 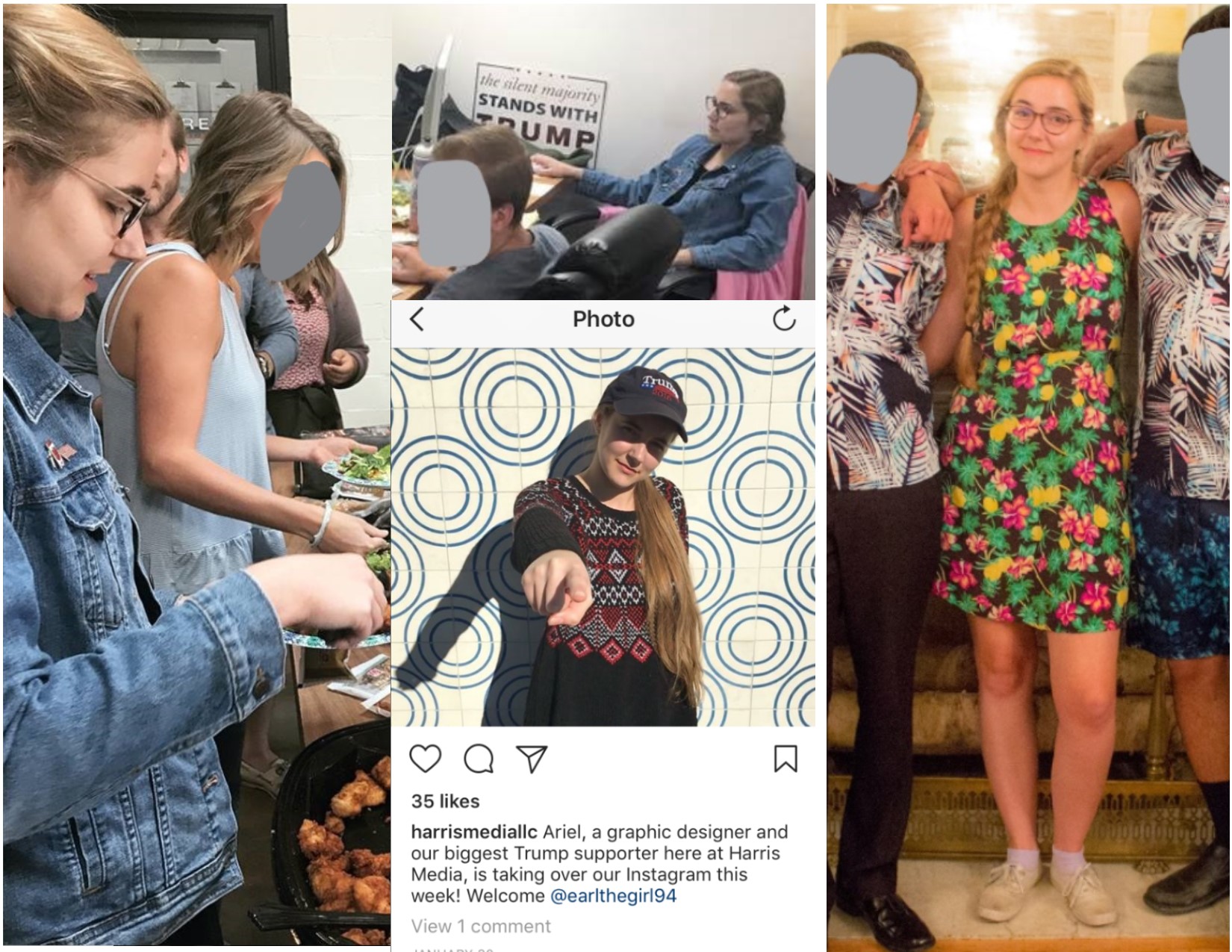 Harris Media is not quite as vocal about their work for groups like the Alternative for Germany (AfD), a nationalist and alt-right affiliated political party in Germany that ran a campaign focused around Islamophobia and anti-immigrant positions.

Ariel grew up with almost every advantage in an upper-middle class suburban neighborhood west of Houston. She went to Texas State University in San Marcos and doesn’t seem to have suffered much setback from her arrest for marijuana possession while in college. Her parents are both college educated professionals in the medical field, but are also Trump supporters and may or may not be surprised or disappointed in their daughter’s neo-Nazi activities. What’s the saying about apples falling from trees? 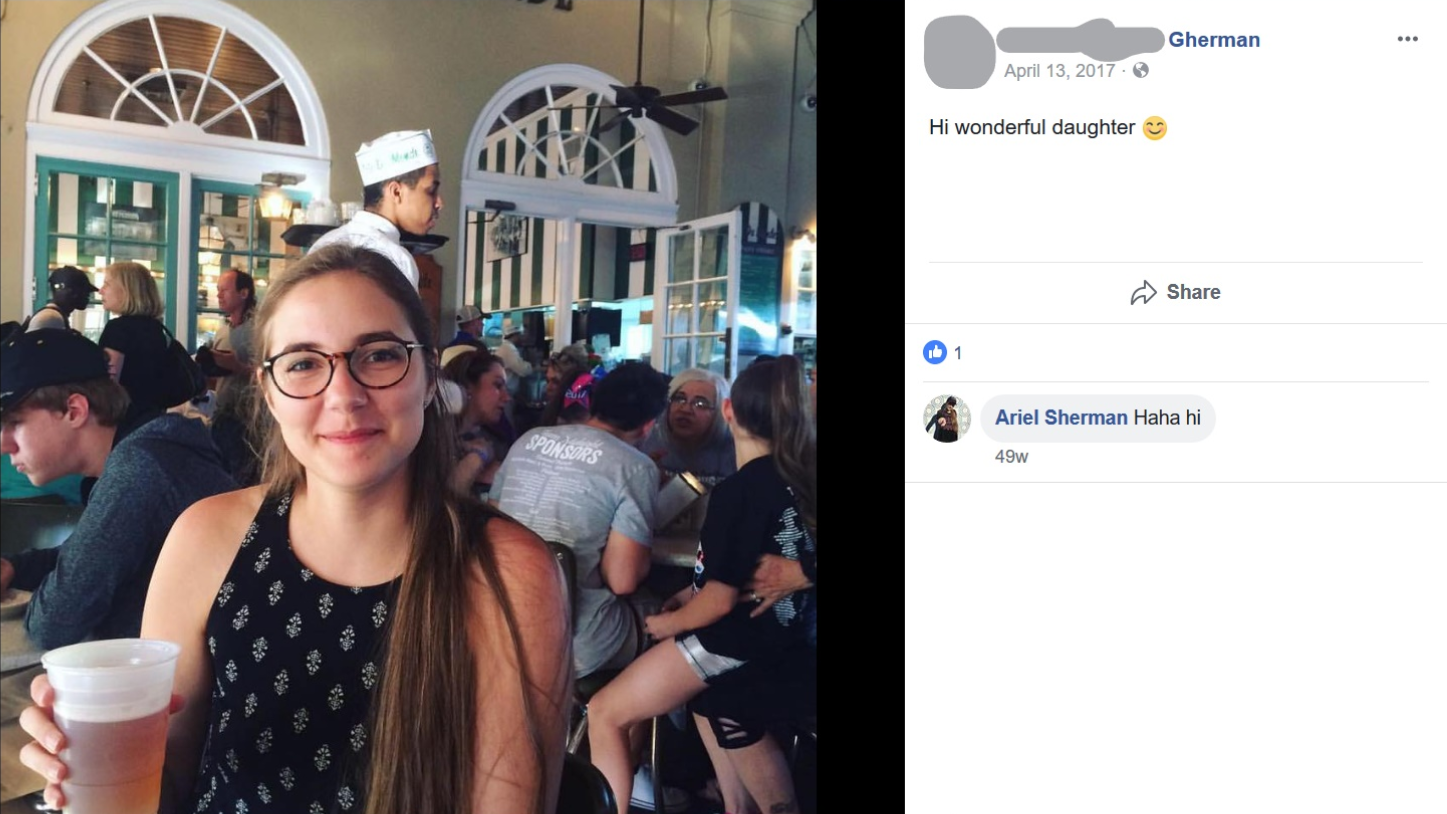 With all this information, it’s unsurprising that Ariel is connected to numerous white supremacists and neo-Nazis on social media, where she sometimes uses the alias “Ariel Sherman.” Whether she’s liking William Fears’ posts about being a neo-Nazi and trying to defend confederate monuments in Dallas or having neo-Nazi Ken Reed liking her profile picture, she is deeply intertwined in the Texas white supremacist movement. 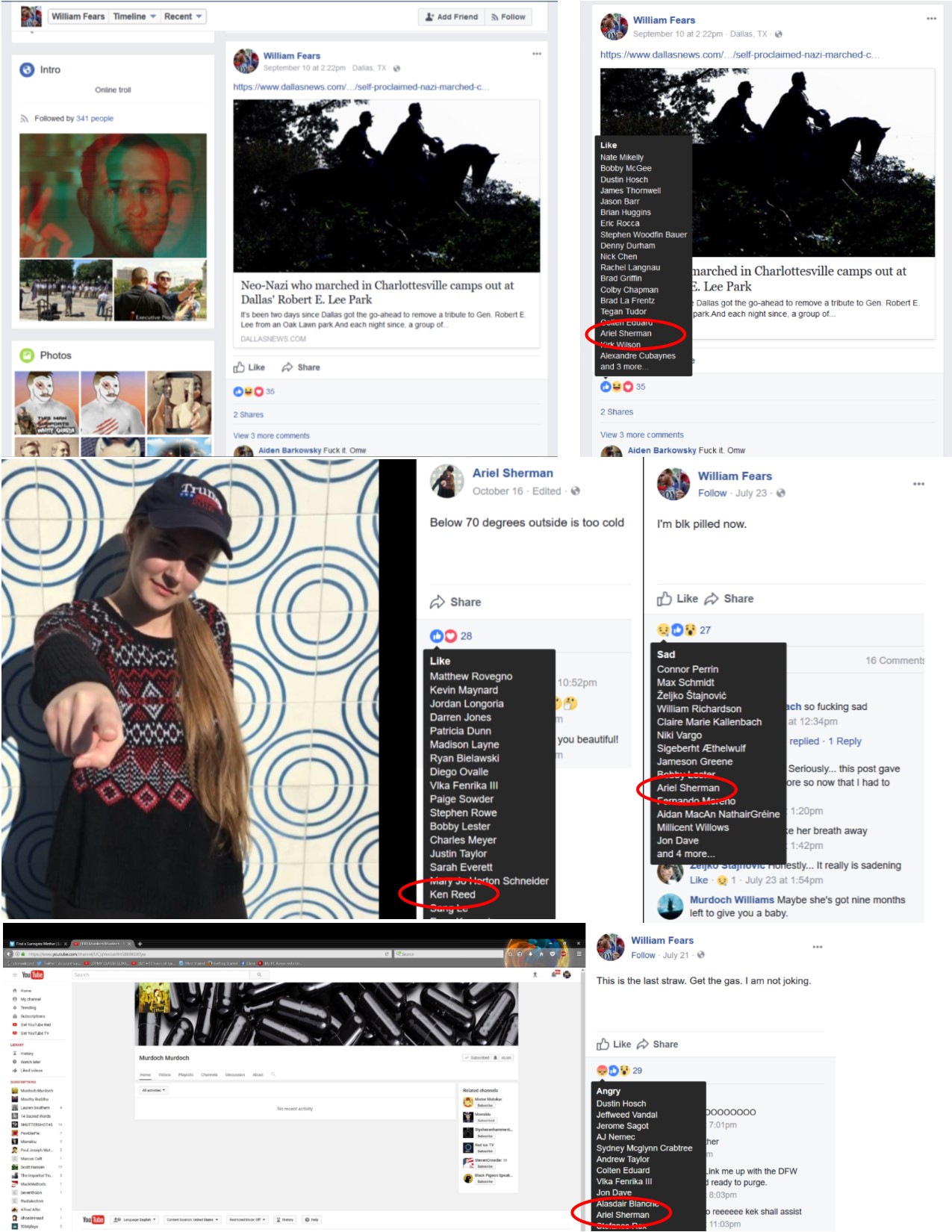 Snapshots of her facebook “Likes” from the summer show her evolution from right-wing libertarian—groups like “Students for Liberty,” “The CATO Institute,” and “Charles Koch Institute”—to alt-right white supremacist—groups like “Identity Europa,” “Traditionalist Workers Party,” and “AltRight.com.” 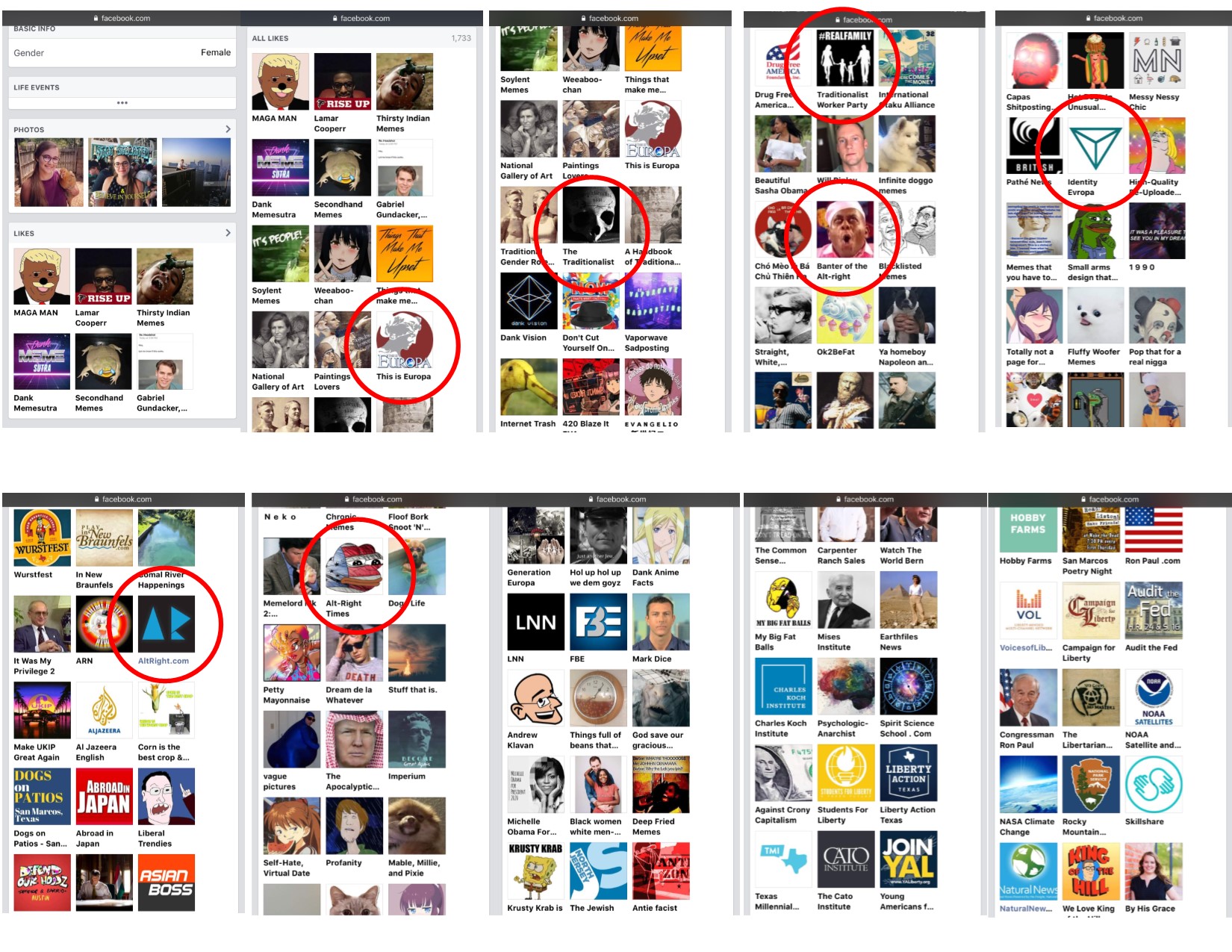 We imagine this information will invite the usual stammering defenses from Ariel and her less Nazi-inclined friends—that she has “friends” and coworkers who are people of color; that it was all a “joke” or a “misunderstanding;” that she was misled. But the evidence refutes that. The people Ariel is associating and politically organizing with—people like William Fears, Ken Reed, Azzamador, Thomas Rousseau, Syndey Crabtree, Chef Goyardee—make no secret of their vision of creating a whites-only ethno-state and the genocide they fully intend to carry out against everyone else. 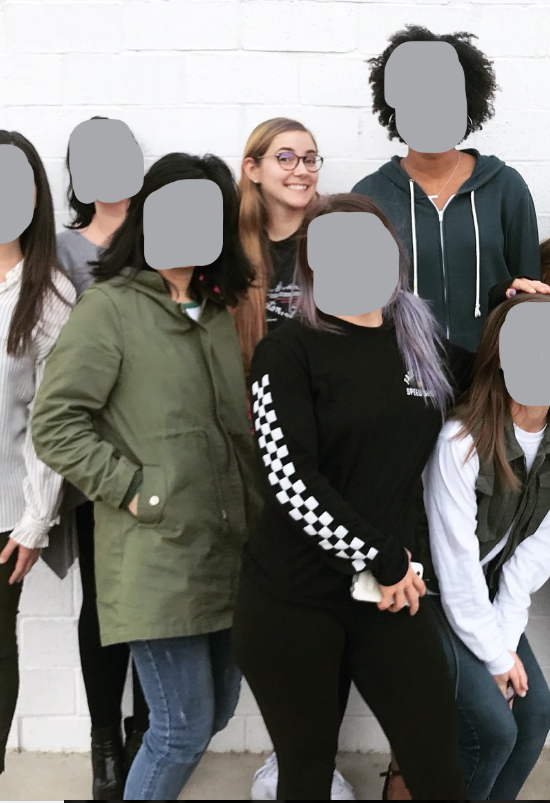 It’s the background people like Ariel who lend cover and a veil of legitimacy to this violent racist project—whether using their “good” names and professional salaries to rent houses for racist mobilizations or just dressing neo-Nazism up as regular “mainstream conservativism.”

So happy birthday Ariel. We hope you get fired. We hope your friends don’t like you anymore. We hope everyone who ever googles your name again knows what fucking racist Nazi scum you are. 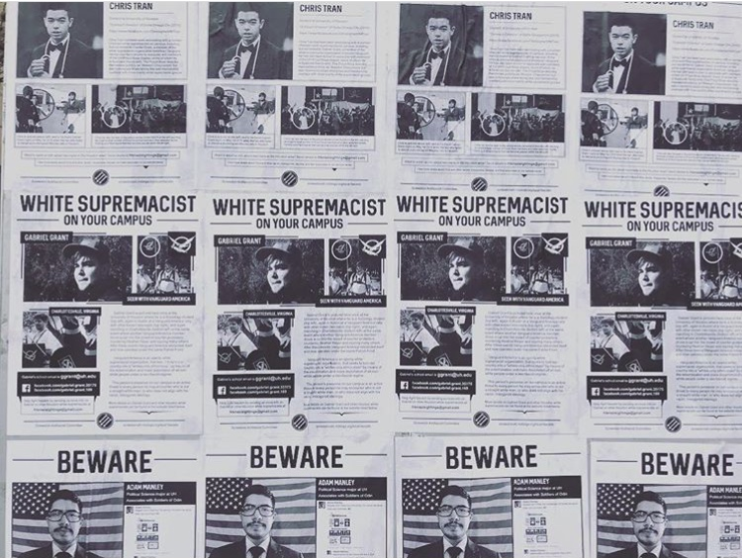 The University of Houston has, especially since Trump’s election, been a frequent target for Texas based fascist groups to flyer and recruit at. Additionally, it appears that a number of current students on the campus are involved with a variety of fascist, alt-right, or far right groups. Vanguard America, Patriot Front, and the Proud Boys are some of the most notable organizations that students have been involved with so far. Other nearby Texas universities have also seen all kinds of fascist activity, from flyers and banner drops to flash mob demonstrations, and even Richard Spencer speaking at Texas A&M University in December 2016. A lot of national fascist organizations including Patriot Front and Atomwaffen Division started out here in Texas, and many big name Texas fascists live within or near Houston. These are some of the reasons that have motivated local anti fascists to take up action against fascists not only in the state of Texas, but the city of Houston, and specifically the University of Houston.

Going on the Offensive

Hundreds of flyers depicting three University of Houston students who have a variety of ties to fascist groups were posted all over campus on Sunday night. The next morning, pictures of the flyers were posted around twitter and instagram by a number of students. One of the students who was targeted by the flyers was seen running and scrambling to tear down any flyers he could find, with a terrified look on his face.

Gabriel Grant, Chris Tran, and Adam Manley were the subjects of the flyering campaign. Gabriel Grant was a member of Vanguard America before and during the fascist rally in Charlottesville, Virginia last year, which he attended in uniform. He had been pictured at a number of other Vanguard America events prior to that as well, brandishing their flags and shields on some occasions. Chris Tran is not a fascist per se, but is a close friend of Gabriel Grant, as well as a large number of local Proud Boys, and has helped disrupt multiple leftist events on campus throughout 2017. Adam Manley was spotted posting Soldiers of Odin propaganda around campus last year and has documented this activity himself on his social media accounts. He also likes a lot of fascist organizations on Twitter and Facebook, including Patriot Front and Identity Evropa. We don’t believe he is a member of these organizations at this time, but he clearly shows strong support for them.

We make no exception for right wingers who foolishly mistake themselves as “disavowing fascism” by taking the route of hiding behind the Proud Boys’ fratlike culture of toxic masculinity, western nationalism and overt chauvinism. Their movement will not be allowed to take root and poison the well in the most diverse city in the U.S.

Visit our page on local fascists for more details about each person.

As proven many times before, doxing can be a very effective and relatively low risk tactic to give neo-nazis what’s coming to them while also discouraging participation in fascist groups. On campus its effectiveness increases even more, because students have more at stake with their college degrees on the line. Moreover, fascist students are sometimes part of other student groups on campus which can become another pressure point for a doxing campaign. Doxing also helps rightfully inform the rest of the student body of individuals who are more likely to commit acts of violence against students over things like skin color, gender, or political affiliations.

Hopefully these actions can help stake out the University of Houston as a place where fascists do not feel comfortable, and lay the groundwork for future anti-fascist activity around the city in general.

We are pleased to announce that this website is up and running! We intend for it to be a resource people can use to follow our public activities, and also to learn more about white supremacists living around the Houston area. The “Local Fascists” section is empty for now, but will become more filled out over time as we choose to release information strategically.

Be sure to check out the resources section, where you can find our stickers to print and a lot of useful websites and reading material.