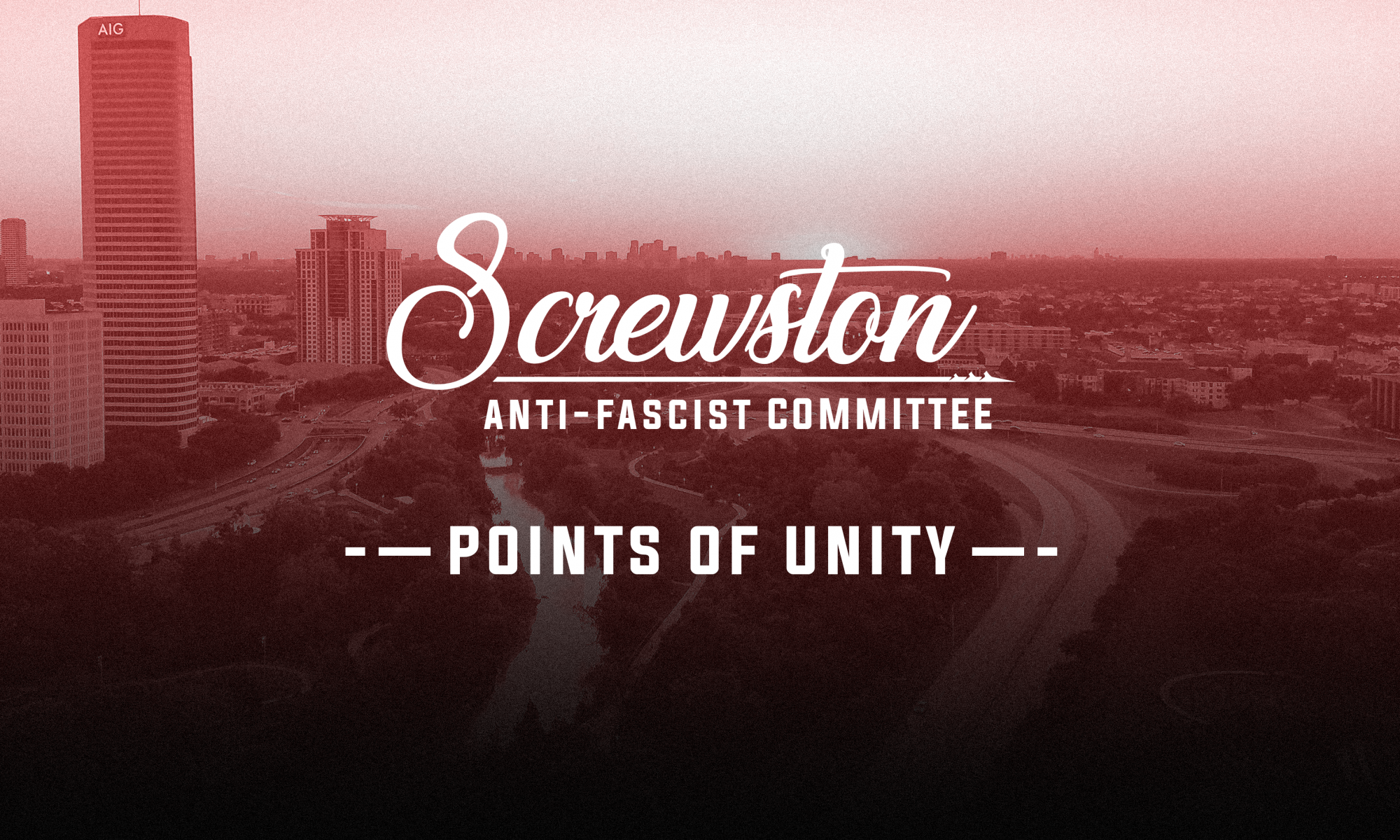 1) Police and the State

Police forces uphold white supremacy and class hierarchy accross the globe. From their historical beginnings as slave patrols and union busters to their more contemporary role as the footsoldiers of mass incarceration and police brutality, the police are the enemy of the working class. When white supremacists have rallies in the streets, it’s not a surprise to see these same police forces safeguarding them and trying to make sure their rallies go according to plan. Many police forces have a history of overlapping membership with a whole variety of racist groups. The Houston Police Department has its own not-too-distant history of overlaps with the Klu Klux Klan. More recently, it has been commonplace to find a heavy overlap between Police and support for former president Trump and his rightwing rhetoric, and in some cases members of contemporary white supremacist groups have been revealed to be police officers.

As an organization, we are opposed to any form of collaboration or cooperation with the police. This includes, as examples, the application for protest permits or the sharing of information about fascists with state agencies. In the streets, we are opposed to policing the behavior of others. Peacekeepers who actively shut down the miltiancy of those around them only help stifle our collective power. We wholeheartedly reject all notions of police reform. We want total abolition of the state itself and every policing apparatus it includes.

We aim to help build working class power capable of overturning the foundations from which both fascism and our own oppression arise. While sometimes necessary, simple reactions to fascist organizing are not the entirety of our struggle. Ultimately, we seek the liberation of all people from the confines of the capitalist mode of production, the state‘s rule, and class society at large.

We support liberatory movements around the world, recognizing that state power is aligned against the interests of the people. We stand against authoritarian, reactionary and counter-revolutionary movements on the left that are not rooted in solidarity with international struggles, or those that deny the autonomy of oppressed people or the justice of their cause.

We are a Feminist organization with no tolerance for mysoginy, homophobia, transphobia, or machismo. We reject the ego-centric and thrill seeking behavior which Anti-Fascist work can sometimes be known to attract. We see the Anti-Fascist struggle as a Feminist struggle in and of itself, which must center Feminist issues and fight against patriarchy as fiercely as white supremacy.

Though often overlooked, the rejection and subjugation of femininity is a fundamental component of fascism, conservativism, and our society at large. While heavily rooted in identitarianism and ultra-nationalism, the forces of fascism that we face today are not actually exclusively white, but are, however, exclusively misogynist. This fact, amplified further by the centuries of war against women which have preceded us, makes the Feminist struggle essential to the defeat of fascist uprisings and any prospect of global revolution.

While sometimes at odds with sectors of the capitalist class, fascist movements ultimately aim to amplify the exploitation we endure under capitalism, reprojecting it even more severly along ideological identity lines. Typically fascism manifests as a response to capitalist crisis, and poses itself as a revolutionary solution to the woes of the working class. Both neoliberal capitalism and insurgent fascist movements must be simultaneously challenged by Anti-Fascists.

Anti-Fascism situated inside the capitalist framework won’t eliminate the root of the problem, or address the instability that causes fascists to see fascism as a desirable ideology. Fascism aside, we as working class people have no stake in a world built to endlessly accumulate capital at all costs. Our environment grows less inhabitable each day while we grind away our youth, only to pass our earnings on to parasitic landlords in an endless loop. We need an immediate, uncompromised end to the capitalist mode of production, by any means necessary.

The world of leftwing organizing can be rife with interpersonal conflicts and political fractures. We take conflicts between people and other groups seriously and hold eachother accountable to a basic standard of conduct. When conflicts arise, we try to solve our issues in the most appropriate setting based on the circumstance so as not to exacerbate the issue further. We will not publicise personal information about other active members of leftwing groups that are entangled in these disputes. We feel internal conflicts are best handled privately between all affected persons, mediated by a non-biased third party.

Our organization does not and will never endorse political candidates of any kind, nor will we promote the act of voting as a solution to our problems.  We will not allow political candidates to join our organization or use revolutionary struggles to build their campaign platform. We openly oppose politicians who show up at events to get media attention and pander to the crowd. Moreover, we recognize that the co-opting of events by liberal politicians and their constituents is central to the state’s counter-insurgency strategy. Fascism cannot be defeated through voting, it must instead be fought directly in the streets. The election of political representitives is not aligned with our goals or mission.