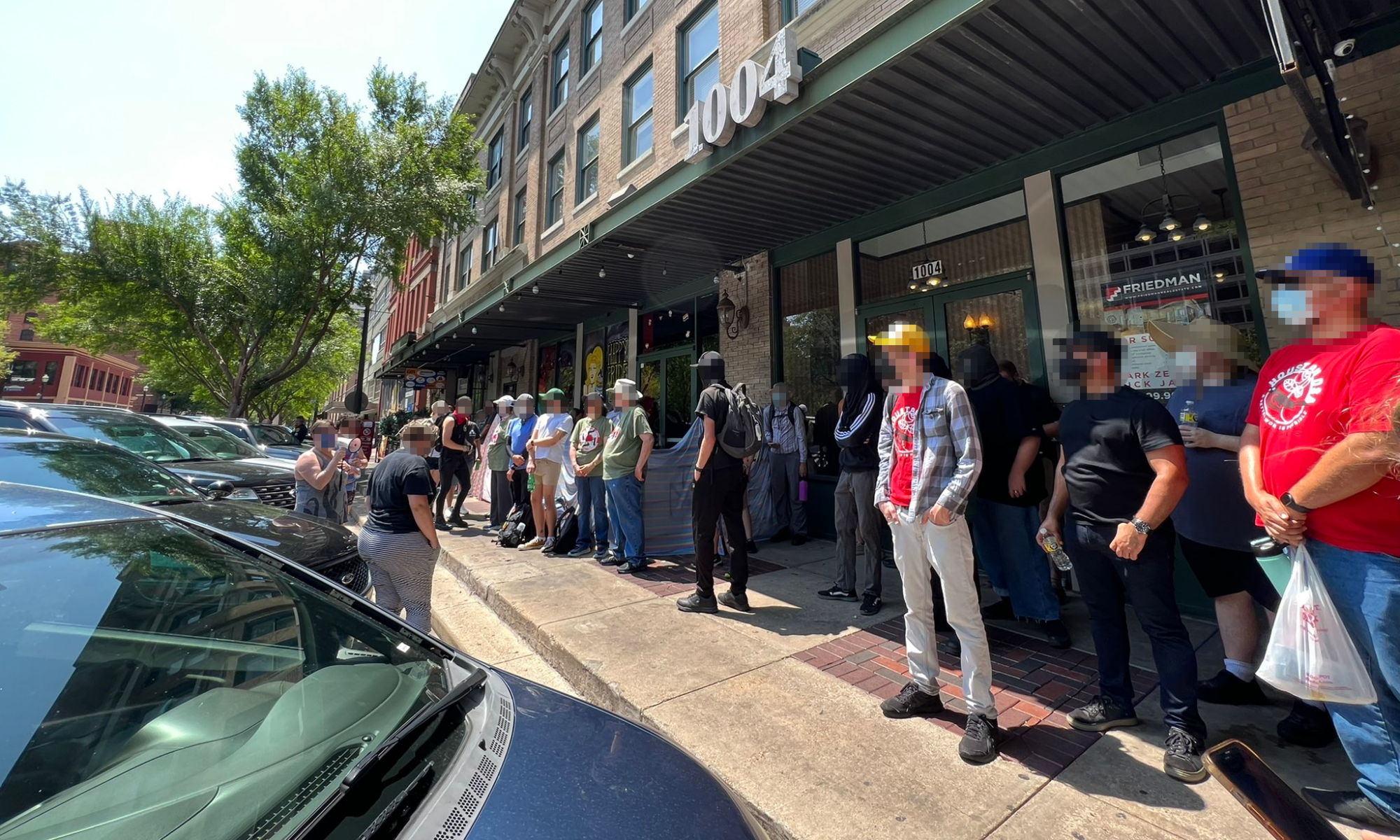 On Sunday, July 10th, 2022, Protect Texas Kids, a hate group led by self-proclaimed Christian fascist Kelly Neidert from North Texas, attempted to disrupt an all-ages drag show brunch event at Hamburger Mary’s downtown Houston location. Having discovered their plans beforehand, local Houstonians rallied together in a counter-demonstration to defend the event. A crowd of about 100 local Anti-Fascists and members of Houston’s queer community mobilized around the venue to guard the entrance, dwarfing the roughly dozen bigots who yelled across the street from behind police and their barricades.

While the fascists’ tiny group stood around occasionally rambling into megaphones, queer Houstonians were drowning them out with our own chants, dancing to music, and staying cool with water, super soakers, and drinks provided by Hamburger Mary’s. The drag show was able to go on as planned, and the fascists were escorted out by police shortly after the drag brunch ended.

Kelly’s attempt to disrupt this event with her group was the latest in a series of actions they have organized against trans and queer gatherings. In general, the group pushes age-old homophobic myths about pedophilia in the queer community as an excuse to show up to events and harass people. They are typically based in Dallas and North Texas, where other Anti-Fascist groups have mobilized against them before. This is one of their first notable appearances in Houston to date, aside from a small group of them trying to counter-protest this year’s Pride Parade last month. We hope after how poorly their rally went, that it will be their last. As far as we know, Kelly and others traveled here from North Texas specifically for this event, despite their turnout struggling to reach a dozen people. While planning the rally, Kelly claimed that “Antifa” in Houston “isn’t very active and it’s likely they won’t show up.” She continues on to say “If they do, I think we will outnumber them.” 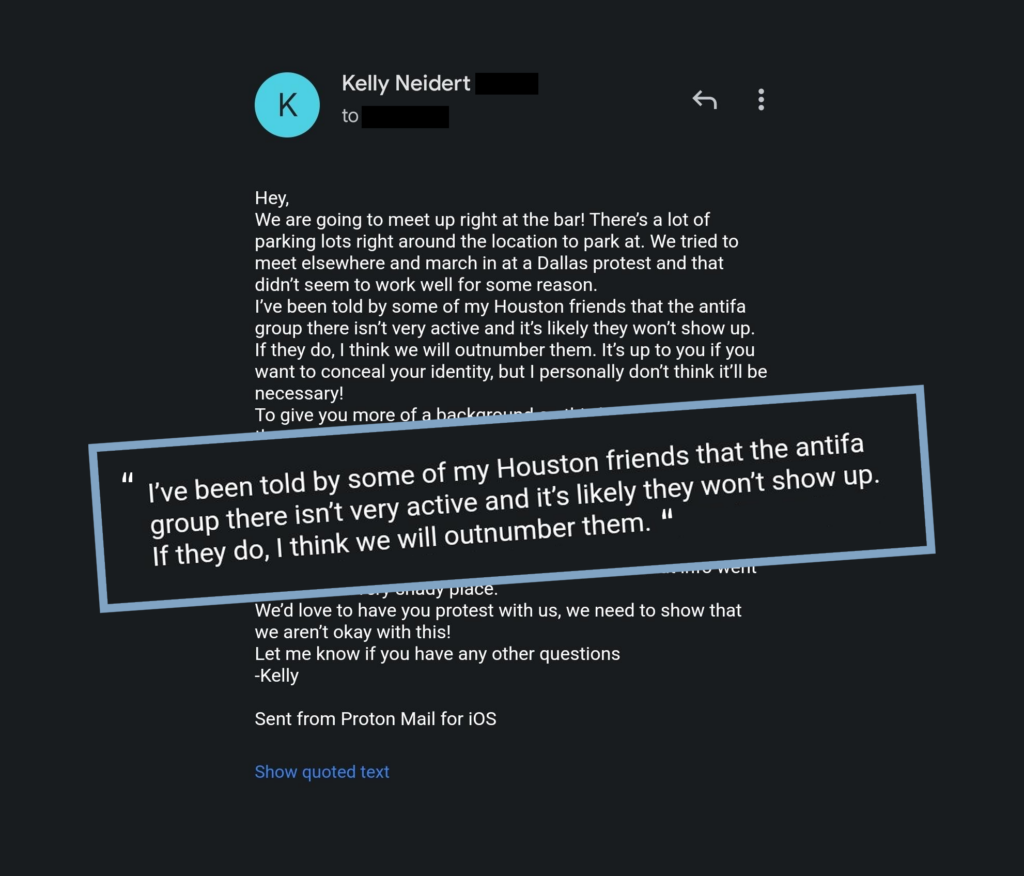 Some of the same fascists who came to Hamburger Mary’s on Sunday also participated in a Houston White Lives Matter rally in December 2021, where they had a similarly low turnout despite bringing people in from across the state on both occasions. Among them was Ronald Murray Jr, a Neo-Nazi we recently exposed for his actions in the Houston area. Ronald gave an interview during the event and shouted slurs over the megaphone. Kelly and her crowd had no problem hanging out with these Neo-Nazis until the cameras started rolling at which point she made an effort to stand farther away from them. Regardless, it was clear they felt welcomed to Kelly’s event and knew they would be safe on her side.

At past events Protect Texas Kids have invited Proud Boys to attend, which we also witnessed this time around. Alongside the actual “Protect Texas Kids” membership, a few non-uniformed Proud Boys were seen in addition to the contingent of Neo-Nazis mentioned above. Neidert claimed our own call to action caused the Neo-Nazis to attend. This is a ridiculous claim for a self-proclaimed Christian fascist to make who has appeared on a holocaust denial podcast and who buddies up with Proud Boys. The only difference between Ronald Murray and Kelly Neidert is a swastika necklace and years of unpaid child support. Members from the fascists’ side attempted to walk towards the venue repeatedly, including three Proud Boys who were forced back to their side and a “radical centrist” who immediately was booed away. Of course, the cops made no attempt to stop them from coming over, and the community had to defend themselves.

Attempts to Police the Counterprotest

There were many attempts to police the community defense of Hamburger Mary’s, from both the cops and from people within the protest. Cops forced us into an increasingly small area, keeping us off curbs, and eventually set up barricades to make a “pathway” that split up the protest in two. The police put up barricades on the fascist side as well, but laid out theirs on the street, giving their tiny group plenty of room. They placed our barricades on the sidewalk, which reduced the room we had even more. As mentioned earlier, the cops made no effort to protect anyone from the fascists. They only intervened when fascists who came over to our side were at threat of getting hurt by the much larger crowd they were harassing. Their role at the protest was clear – to pacify our crowd and keep the fascists safe throughout their demonstration.

As often seen at Houston protests, policing of the crowd also came from self–proclaimed “organizers”, who had not organized this event but still attempted to co-opt it. These peace police scolded people for dressing in masks so they don’t get doxxed by fascists, told people to stop militant chants that the rest of the crowd was fine with, and tried to get people to stop waving any signs they didn’t like. These “organizers” made no effort to get in contact with us to help organize or coordinate the event, and instead tried to position themselves as leaders of a crowd that largely came out because of our call to action. Their justifications were that they wanted the event to be a safe place for the community – even while ordering around the trans and queer people who actually organized the event – and that they wanted to present queer people in a positive light to the children in the fascists’ crowd who are being indoctrinated (there were about 2 or 3 kids in their crowd total). Despite their concerns for “safety”, they were nowhere to be seen when cops were boxing us in or when fascists tried entering the crowd. Outside of this small group, however, nobody else seemed to have an issue with the more militant members of the crowd. Instead, people in bloc and those who directly confronted fascists were often thanked, the crowd joined in on militant, anti-cop chants, and people asked to take photos of signs with slogans like “these queers bash back”. Ultimately, the peace police gave up on their efforts to control the counterprotest when the threat of nazis and cops became too clear to ignore.

The ‘sacrificial’ role that march-and-vote peace police continue to sloganeer about illustrates the fundamental logic and limitations of liberal ‘bodies and spaces’ politics. Peace policing directly contradicts and undermines our own capacity to truly take up community self-defense is fundamentally repressive and serves as willing counterinsurgency which directly benefits the fascists, cops, and the capitalists they protect.

The counterprotest stretched far beyond our own membership and relied on the other organizations and individuals that belong to no group to succeed. We want to thank the nearly 100 people who came out to defend our community and Hamburger Mary’s for keeping the drag brunch running despite the pressure. We also want to thank the numerous groups and organizations that came out, including (but not limited to):

Belly of the Beast Media Collective

Sunday showed that Houstonians are strong, resilient, and do not accept hate towards our neighbors. The counterprotest ended up being a celebration of queerness as we kept each other safe from fascists and pigs, and a reminder that our queer community is rooted in protest and rebellion. From Stonewall to Houston’s protests against Anita Bryant that started Houston Pride, to Sunday at Hamburger Mary’s, queers will always bash back and will look beautiful while doing so.

You can view the press release we posted prior to the event here: