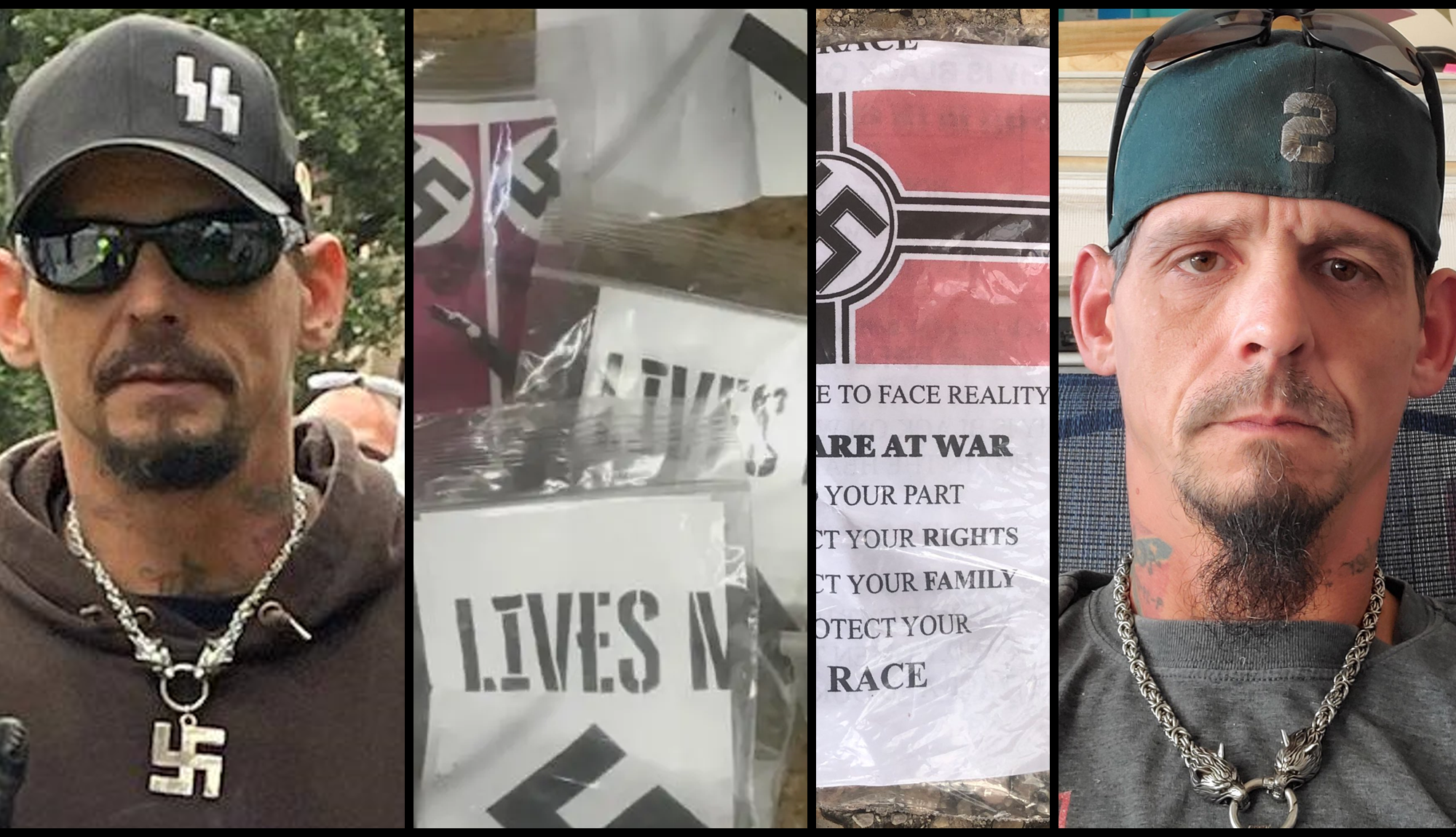 We have updated this article to clarify that Ronald Murray no longer drives his sister’s white truck. At this time he is only known to be driving theTan Acura SUV registered to his brother-in-law mentioned later in this article.

Ronald Lee Murray Jr. has been responsible for flyering Houston and other cities with Neo-Nazi propaganda through a variety of white supremacist groups he has been a part of. He has also played leadership roles in many of these organizations and attended a hate rally at the Jewish Anti-Defamation League building in Houston this year. Ronald has a giant swastika tattooed on his back and has been seen wearing a swastika necklace and a Nazi SS hat. He currently lives in northwest Houston, Texas.

Soon after the merger, 14 First seemingly ceased to exist and its website became inactive. At roughly the same time, White Lives Matter (WLM), a white supremacist network that operates throughout the U.S and Canada with a small presence across Europe, began re-emerging in public telegram channels after a few years of inactivity since their original appearance in 2016. Murray seems to have been involved in the Houston area chapter since its new beginning. Later on, he joined the Neo-Nazi group Aryan Freedom Network (AFN) and repeatedly flyered for them as well. His most recent case of flyering was promoting 14 First the Foundation, but sometimes White Lives Matter flyers are found mixed throughout. Formerly Murray used the telegram name “Ronald 14 First”, but now uses the name “Racist Pamphleteers” to highlight his frequent flyering sessions. Below are some screenshots from his Telegram activity.

It seems Murray continuously hops from group to group as he attempts to find a place for explicit Neo-Nazism within a fascist movement that increasingly rejects the imagery of old-school Nazi skinheads.
Ronald appeared to play a very involved role in the White Lives Matter rally that took place in Houston this year at the ADL building. He maintained a front and center presence at the rally and was one of the only people there not masked.

He also likely used his sister’s white truck to charter members to and from the rally, which was witnessed by attendees. He has been seen flyering in a white truck as well, which he admitted to on the news on at least one occasion. However, to our knowledge, Ron no longer drives his sister’s white truck. It should also be noted that, while Ron does appear to do a heavy amount of flyering, there are also other members of his group(s) who may occasionally flyer as well in an assortment of different vehicles. Most recently, Ronald distributed Neo-Nazi flyers around the Northside of Houston in a tan Acura MDX SUV which is registered to his brother-in-law Alvin B. Daugherty. The SUV is the vehicle Ron drives regularly and is the same vehicle caught on Ring camera footage by victims of recent racist flyers in Houston. Ron used to live with his sister and brother-in-law at their home in Cypress. Ronald’s brother-in-law, Alvin B. Daugherty, is a retired Deputy Sherriff from the Harris County Sheriff’s Office. Although Ron no longer lives with them, it has been reported to us that some non-white neighbors have had prior disputes with the Daugherty household where Ron was living. It has also been reported that Ron has been seen occasionally coming and going to the house throughout the last few months.

Ronald Murray has since moved to an apartment in a nearby region, potentially hiding out from police who had reportedly come looking for him at his Sister’s address before. He has an active warrant out for his arrest for missing child support payments and has a prior criminal record for a marijuana possession charge.

Visit our Pastebin page to view his address and other details. 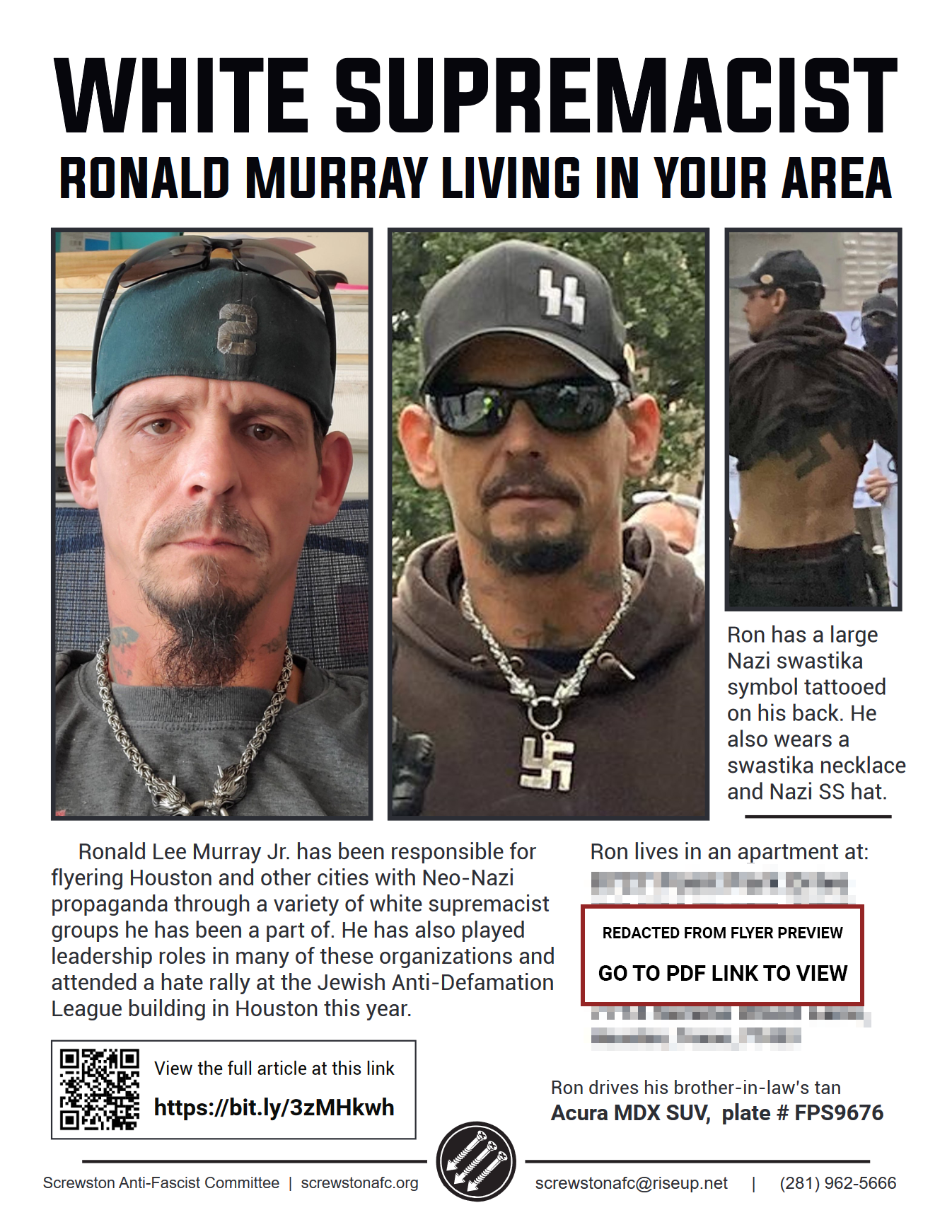 In the past few months we’ve seen an uptick of attempts to attack Jewish establishments by white supremacists in Texas. Recently, a synagogue was burned down in Austin after a series of anti-Semitic actions by the Goyim Defense League. There has also been an increase in the distribution of antisemitic propaganda throughout the U.S. by various groups. This week, we’ve seen another attempt to threaten the Jewish community in Houston.

On Saturday, December 18, Neo-Nazis and white supremacists affiliated with White Lives Matter (WLM) organized a demonstration outside of the local offices for the Anti Defamation League. After weeks of planning, they managed to get a dozen Neo-Nazis to show up and stand in the rain with antisemitic signs. The Screwston Anti-Fascist Committee was informed of the event by another Anti-Fascist group, and within a day managed to organize twice as many people to protest against them. We were proud to stand in solidarity with everyone who showed up to fight white supremacy, both those in formal political organizations and those who went alone. The Houstonians who came out showed white supremacists that they are not welcome in our city, and that we will not tolerate bigotry against our neighbors. White Lives Matter was late to show up, and it was already raining by the time they had come. After a brief clash between the two sides, cops came to separate us and protect the fascists. The police were clear in their intentions, having openly stated that they were there to protect the Nazi’s right to “free speech”. WLM even admits to this, as can be seen in their gab post about the event: 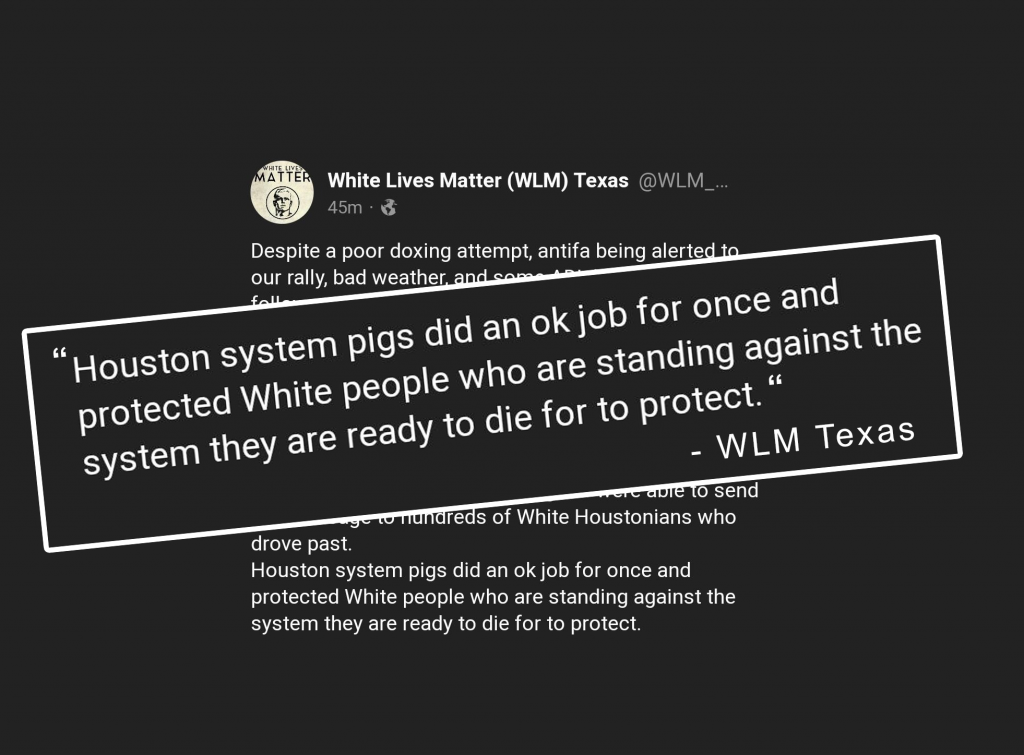 It’s clear that the police don’t protect the people of Houston,but instead aim to make sure Neo-Nazis can safely organize events and spread their genocidal message.

The fascists in WLM forgot to bring umbrellas, so their signs ended up getting washed out by the rain. After about an hour of trying to show off their faded and nearly incoherent ramblings to the few cars passing by and getting their shouts drowned out by our significantly larger crowd, the WLM members scurried away within the police escort. The event was a clear success for the Anti-Fascists, and Houstonians who showed up in solidarity with our Jewish neighbors. Not only did we significantly outnumber the WLM members and take their signs, but we got them to leave and drowned out their message, reminding them that antisemitism and fascism wont be tolerated in Houston.

White Lives Matter is a decentralized network of white supremacists. They mainly organize in various regional telegram groups divided on the state level, and country level for groups outside the so-called U.S. After a few years of dormancy since they first appeared in 2016, the group got off to a rocky re-start in April after they attempted to coordinate rallies across the so called U.S. Their rallies failed to attract more then a handful of people at each location in the instances where they weren’t cancelled completely. Anti-Fascists infiltrated local telegram groups and vastly outnumbered the few fascist protestors who did show up. Now, their protests struggle to attract more then a dozen participants, and they mainly distribute white supremacist and white genocide conspiracy content in an attempt to indoctrinate white Americans and to terrorize marginalized communities. Most members of White Lives matter are explicit fascists, using usernames with references to the third reich and, in the case of many of the WLM members on the 18th, wearing swastikas, SS bolts, or other symbols of Nazism. They’ll sometimes try to obscure this fact to seem more respectable for the sake of “optics”, but as this event shows, they still have a hard time keeping hate symbols out sight.

Statement on the ADL and Zionism

The Anti-Defamation League was likely chosen as a target by “White Lives Matter” for multiple reasons. For one, it’s one of the most prominent Jewish organizations in the country and is featured prominently in many conspiracy theories about white genocide, so they intend to terrorize and intimidate all Jews by targeting it. They also likely chose it as a target in order to sow divison among the left —WLM seeks to bait their enemies into supposed hypocrisy so they can accuse us of being zionists, but there is no hypocrisy in our position. The ADL is a firmly right-wing zionist organization with a history of surveilling and maligning social justice movements and support of law enforcement, including sponsoring israeli trainings for NYPD. Loyal to the israeli settler-state, the ADL silences criticism of israel’s apartheid, ethnic cleaning and war crimes by targeting and smearing Palestinians and their Jewish anti-zionist allies as anti-Semites. While their purported mission as a civil rights organization is to combat antisemitism, they are unabashed in their public support of anti-Semites and right wingers in the US and elsewhere.

The Screwston Anti-fascist Committee stands in solidarity with all oppressed people worldwide. We stand in solidarity with Jewish people in the US and elsewhere who are among the most frequent victims of hate crimes and whose communities are constantly under attack. We stand in solidarity with the millions of Palestinian refugees in exile who are barred from returning to their homeland by the israeli settler-state and those who are resisting  occupation and apartheid in Palestine. We do not support the ADL in any way and did not call this rally to defend the ADL specificaly.

The counter-protest on December 18th may have been a victory, but it’s just one battle in the war against fascism. We must continue to organize against white supremacy and fight it wherever it rears its head. We ask the readers to cover up and deface any fascist propaganda they might see, inform Screwston Anti-fascist Committee or other Anti-Fascist groups, and to otherwise do everything you can to fight to keep your community safe from fascism, white supremacy, antisemitism, and bigotry in all forms. It’s only by working together and practicing care and solidarity towards those around us that all of us will be able to defeat fascism.

Special thanks to Red Fog 161 and the Elm Fork John Brown Gun Club for helping make this event possible, and to the Houston Socialist Movement and Houston United Front Against Fascism!